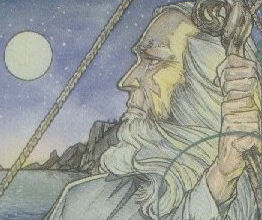 Lately, I’ve been pushing myself to build more thematic decks. With powerful new archetypes like Ents and Noldor, as well as the resurgence of older archetypes like Rohan, the game is in a great place when it comes to thematic deck-building. As someone who enjoys designing and tinkering, it is rewarding to build something that feels true to the source material and remains viable against many quests. Still, it can be nice to diverge from strictly theme-based decks and try a different approach. This deck is unabashedly a “combo deck” and is not intended to be particularly thematic.

Thanks to cards like To the Sea, To the Sea! and Lords of the Eldar, there will no doubt be some very powerful Noldor decks that field armies of impressive elves. The Ring of Power, Narya will fit right into such decks. The idea of readying allies multiple like Gildor Inglorion or ally Glorfindel is appealing to any deck. The fact that the ring also boosts their already impressive combat stats is almost too good to be true.

I’ll leave these ally-heavy decks for others to work out, and I have every confidence that such decks will be among the most powerful in the game. Although Círdan was a Teleri, the game has chosen to portray him as Noldor, and his powerful hero card will be yet another boon to that faction. With this deck, I have decided to focus on Círdan himself, rather than his ring or it’s accompanying strategy.

This is fitting in a way, as he gave the ring to Gandalf, when the Istari first showed up in Middle-earth. No small gesture for one of such noble lineage, Círdan was one of the few elves who did not seem burdened by the hubris of many of his brethren. Being able to willingly gift a ring of power to someone else has always struck me as an impressive level of generosity. Don’t let his beard  or generosity fool you, though, Círdan was no weakling.

“Take this ring, Master, for your labours will be heavy; but it will support you in the weariness that you have taken upon yourself. For this is the Ring of Fire, and with it you may rekindle hearts in a world that grows chill. But as for me, my heart is with the Sea, and I will dwell by the grey shores until the last ship sails. I will await you.”

He was among the eldar who fought alongside Gil-galad at the War of the Last Alliance. It was he, together with Elrond, who urged Isildur to destroy the One Ring. Until the end of the Third Age, he remained one of the wisest and most powerful of the Eldar in Middle-earth. This deck is an fun attempt to portray just how powerful Círdan can be, even when he is without his ring.

The premise is simple, we will use the incredible draw engine of Erestor and Círdan, along with cards like Elven-light, to find our combo as quickly as possible. The combo in question is to attach Nor Am I A Stranger to Círdan and then give him Théoden’s sword, Herugrim. In most decks, building your entire strategy around a two card combo would represent a huge risk. Of all the factions, Noldor has by far the most powerful card-drawing capabilities, so it makes combo decks like this much less difficult to play. 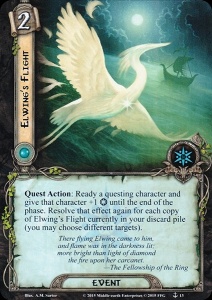 In addition, the resource acceleration afforded by Arwen Undómiel will help to mitigate Erestor’s drawback. Having to discard your entire hand might at first seem like a terrible cost, but there are several tricks included that should make this much less of an issue. Besides discarding for Arwen, we have several cards which can be played from our discard pile. To add to this strategy, we have the new Spirit event from The Grey Havens – Elwing’s Flight – which becomes more powerful with each copy in the discard pile. Essentially, we are turning Erestor’s drawback into a strength. 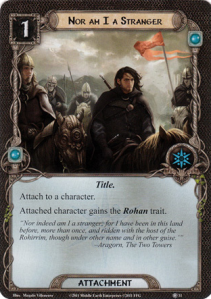 Once we have our combo in play, we won’t need any additional copies of our combo cards, so we can safely discard those as well. There are very few allies in the deck; the aforementioned ring is relegated to a sideboard card. Instead, we are looking to get maximum use of our  heroes, particularly the Shipwright.

His 4 willpower is impressive, but we want to benefit from this strength during more than just the quest phase. With the help of Light of Valinor (it feels good playing that card on someone other than Glorfindel), Círdan does not exhaust to quest. This, along with other Spirit-based readying effects, should ensure that he is standing tall when the combat phase arrives. That is where we have another chance to take advantage of his impressive willpower.

Herugrim is an expensive card, and one that is typically only attached to Rohan heroes like Théoden or Éowyn. I wanted to have a bit of fun with this deck, and see how difficult it would be to make the sword work with a completely different hero. I won’t even attempt a narrative to explain how one of the oldest elves in Middle-earth, master of the havens, would come to wield the King of Rohan’s sword. Even a shape-changing bear finds some things inexplicable. After all, every deck tells a story, but not all stories make sense.

From a strategic standpoint, though, this deck can make all kinds of sense. Other then card-drawing effects, this deck is loaded to overflowing with willpower-boosting effects. I admit to a certain joy in discovering an actual use for cards like The Favor of the Lady and Star Brooch. When your hero gets to add his willpower to his attack, suddenly these cards don’t seem so inefficient. Unlike true combo cards, it’s not like they are dead without the sword, either. A worst case scenario with this deck is that you are relegated to one of the best questing decks every conceived.

Supplemental cards like Fair and Perilous can also help keep you alive while the combo gets setup. With 3 copies of key cards, do not be afraid to discard a copy of the combo early if absolutely necessary. As far as your opening hand is concerned, look for Nor Am I A Stranger, not the Sword. The title is a requirement before you can attach the weapon, and it will take a perfect hand (including A Good Harvest) to play both of them on the first turn. It’s easier to setup the combo in pieces, and get some less expensive support cards like Light of Valinor in play as well. 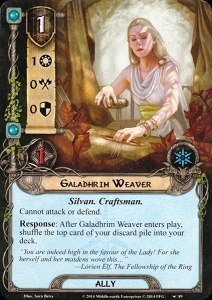 Will of the West and Galadhrim Weaver allow you to get back critical cards if they find their way to your discard pile, but many of the cards in this deck are designed to be discarded. The Noldor discard archetype is a very different sort of deck because cards in your discard pile can as relevant to your strategy as the ones in your hand – often even more so. Silver Harp remains a staple, as there will be times when you have a card in your hand that you are not ready to discard.

This deck has almost nothing in the way of defense, and as powerful as Herugrim is it can only be used for a single attack each round. With these limitations and a starting threat of 31, this deck is not intended for solo play against most quests. Still, the level of willpower that you can quickly and easily bring to the table is impressive. Paired with a Dúnedain or other defensively-minded deck, this strategy can really shine. I look forward to the traditional Noldor decks that will emerge from The Grey Havens and Dream-chaser cycle. Still, it is fun to mix things up and try a very different strategy from time to time. Let me know what you think, and share your own combo deck ideas in the comments. 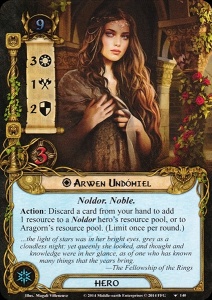 Events: 19
Elrond’s Counsel x3 (The Watcher in the Water)
A Good Harvest x3 (The Steward’s Fear)
A Test of Will x2 (Core Set)
Elven-light x3 (The Dread Realm)
Fair and Perilous x2 (Across the Ettenmoors)
Will of the West x2 (Core Set)
Elwing’s Flight x3 (The Grey Havens)
Lords of the Eldar x1 (The Battle of Carn Dûm)

The Road Goes Ever On

Of the Quests from The Lord of the Rings: The Card Game

'In panoply of ancient kings, in chainéd rings he armoured him...'

Tales from the Cards