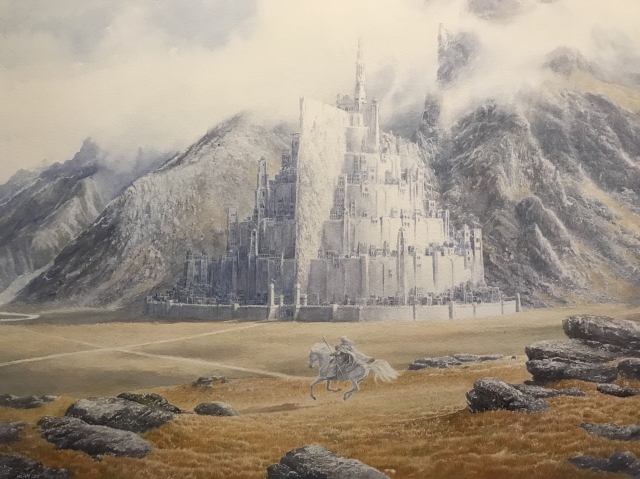 For a while now I’ve wanted to create a saga deck with the latest card pool and play through all of the quests in a full campaign. It should come as no surprise that I wanted to build a deck around Grimbeorn the Old. I’ve also been greatly enjoying the player contracts introduced this latest cycle and deluxe, so I decided to build a Forth, The Three Hunters campaign deck around Grimbeorn the Old. This combination of design decisions proved fortuitous, as Grimbeorn is a hero who greatly benefits from an attachment-heavy strategy in general, and restricted attachments in particular.

While the goal was for the deck to be viable throughout the saga quests, this is not to say that I used the exact same deck list for every quest. Indeed, the deck features a full sideboard of fifteen cards, some of which proved invaluable for specific situations. The idea is to craft en engine which is consistently handles the various challenges presented in the saga campaign with minimal re-tooling between scenarios. At most, I substituted four or five cards for a given quest, and most of the early quests required no changes whatsoever. You can find the complete deck list on RingsDB, along with an outline of some quest specific strategies.

As as way of enhancing the game experience, I’ve made of point of finding alternate art for my favorite and oft-used decks. A deck which would be played for every saga quests certainly feels worthy of alternate art treatment. The Hobbit was first published in 1937, and The Lord of the Rings saw publication between 1954 and 1955. It wasn’t until the 1970s and 1980s that Tolkien’s works fully entered mainstream consciousness, but there are a few artists who have been crafting paintings and drawings inspired by Tolkien’s legendarium for over 30 years.

One such artist is the great Alan Lee. Lee’s Tolkien-themed works are so ubiquitous, that many are probably not aware of just how influential his visual style is the helping people conceptualize the world of Middle-earth. Among others, Alan Lee has pained the covers of The Hobbit, The Children of Húrin, Beren and Lúthien, and The Fall of Gondolin. That list only scratches the surface of his various contributions, but suffice it to say that Alan Lee is a giant in the world of Tolkien art.

With that in mind, I went ahead and designed my saga deck so as to highlight the beautiful work of the inimitable Alan Lee. I wasn’t able to find appropriate hero art, so those images were created by other artists, but every other card in deck features art by Mr. Lee. Contact the hall if you are interested in printable images, or you have spare mead or honey-cakes in desperate need of tasting. I hope that you enjoy the deck and the beautiful art, and I wish you all many happy adventures in the wondrous realms of Middle-earth!

A Test of Will

The Road Goes Ever On

Of the Quests from The Lord of the Rings: The Card Game