The greatest adventure is what lies ahead
Today and tomorrow are yet to be said
The chances, the changes are all yours to make
The mold of your life is in your hands to break.

The greatest adventure is there if you are bold
Let go of the moment that life makes you hold
To measure the meaning can make you delay
It’s time you stop thinking and wasting the day.

The greatest adventure is what lies ahead
Today and tomorrow are yet to be said
The chances the changes are all yours to make
The mold of your life is in your hands to break.

The greatest adventure is what lies ahead.

Nostalgia is one of the most powerful emotions, all the more so because we are often blissfully unaware of its hold on our hearts. It is impossible for me to judge The Hobbit with an objective eye, as it is one of the first stories I ever read. Before that, when I was still too young to read any but the shortest books, my father would read Tolkien’s word to me as bedtime stories. Even now, all these years later, I can close my eyes and imagine my father sitting on the end of my bed. His words echo down through time; visions of dragons and elves, magic swords and goblin kings, taking me back to my childhood.

Long before Peter Jackson even conceived of bringing Tolkien’s stories to the silver screen, Arthur Rankin Jr. and Jules Bass created an animated version of The Hobbit. This adaptation is not without its flaws, but its evokes fond memories in me, in no way diluted by the passage of time. The animation was drawn by a precursor to Studio Ghibli, and much of it holds up even 40 years later. Also, John Huston was a brilliant bit of casting as Gandalf, his gravely baritone summons the wizard as if out of thin air.

Continuing in my series of alternate art designs, I’ve built a Dwarven Digging deck with art taken from the 1977 animated classic. This deck represents several firsts for me. It is the first deck I’ve designed around hero Gandalf. It is also the first Dwarven Digging deck I’ve been able to build that plays with an acceptable level of consistency. I’ve wanted to feature the Spirit version of Dain Ironfoot, but this list took some twists and turns before it arrived at this version.

The full deck list can be found on RingsDB. Gandalf’s passive ability of making the top card of your always visible is powerful in any deck, but doubly so when we want to be digging specific cards off the top. Without the insane stat boost of Leadership Dain, the deck lacks the late game punch of traditional Dwarf Swarm decks, but Spirit Dain gives us an impressive defender for the critical early rounds.

I usually put the first copy of Unexpected Courage on Dain, though Gandalf can be a good choice. Armor is obviously intended for Dain, and the allies typically help with questing. With so many attachments, the new Erebor Toymaker is a perfect fit for our strategy, giving us an attachment and and additional quester for a relative bargain. Without a Leadership hero, remember to wait until Gandalf has Narya otherwise Leadership cards must be played using Gandalf’s ability from the top of the deck.

Unlike traditional swarm decks, combat is mostly handled by our heroes – which makes action advantage on them all the more important. Nori provides consist threat reduction, which is key in a deck with a high starting threat. The heroes do most of heavy lifting here, which is a nice change of pace. I mostly play multiplayer games these days, so this deck intentionally omits key components to a well-rounded solo deck. 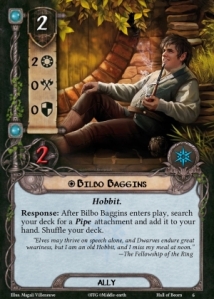 Healing, location control and shadow cancellation are absent here. As much as possible, I tried to hew to a thematic interpretation of the story of The Hobbit. This naturally leaves many strategically powerful cards for other, more mechanically inclined decks. Even so, this deck can be quite effective, particularly in multiplayer where Dain and Gandalf prove a stalwart defensive presence once they are loaded up with gear. 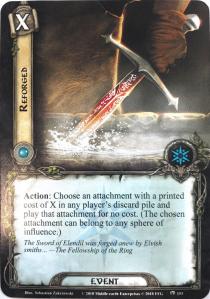 Guarded attachments are here, and are central to the theme of the deck. Some quests require the players to race, which can turn the early tempo hit of Guarded attachments into a very risky proposition. In those situations, I would recommend using the sideboard to replace these Guarded cards with additional support in the form of A Test of Will, Narya and Gandalf’s Staff. Reforged is another valuable option, as the Dwarves, in their overly enthusiastic digging, will sometimes bury desirable attachments in your discard pile.

My favorite aspects of heavily narrative decks such as this one is when small touches work both thematically and mechanically. As case in point is when ally Bilbo is used to fetch Gandalf’s Wizard Pipe. That attachment is critical among a long list of useful attachments, as it lets us stack cards like Hidden Cache and Ered Luin Miner back on top of our deck, after they end up in hand. Gandalf’s ability to see into the future is such a natural fit with the Dwarven Digging archetype, that it makes this style of deck a thematic and strategic success.

I hope you enjoyed this trek down memory lane, and for younger readers who may not have experienced the animated version of the Hobbit, I encourage you to seek it out. As always, contact the Hall if you are interested in printing these alternate art cards for yourself. May you all have the greatest of adventures down memory lane, and throughout Middle-earth!