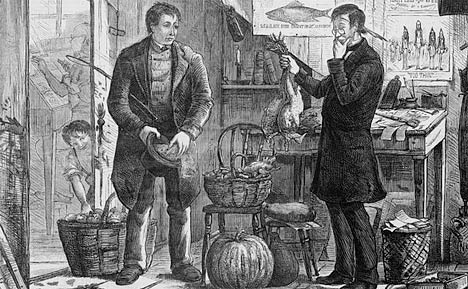 While the new power cards from the Dale archetype were joining the party, amid much fanfare, a group of less-heralded cards were slinking around the back of the house, to smoke pipes and specifically avoid their more gregarious companions. Silvan, and to a lesser extent Rohan decks built around Gamling, introduced the concept of bouncing allies into and out of play. While the Silvan deck take advantage of responses to their allies entering play, Rohan is more about assembling a toolbox of inexpensive allies, which can be discarded for useful effects. Gamling then returns these discarded allies to your hand, and Santa Théoden allows you to play them again at a discount.

The Silvan variant of this strategy tends to be more consistent, as the allies are more potent thanks to a global boost from Celeborn, and their beneficial effects trigger immediately, rather than on discard like Rohan allies. Also, the Rohan approach can be expensive. The errata to Horn of Gondor makes the prospect of paying for multiple allies difficult, unless you concede the point and just use Steward of Gondor. As a bear who plays more multiplayer than solo, I see Steward of Gondor as a last resort and try to limit its use to more thematic Gondor or Outlands decks.

Ally bounce has existed in home form or another since the first cycle, there has never been an equivalent strategy for attachments – until now. Certainly, there are shenanigans around Second Breakfast and the Record attachments, but this doesn’t exactly qualify as “attachment bounce” as the attachments were never returned to your hand. Bard Son of Brand now allows players to return ally attachments to their hands, when that ally leaves play. This ability might at first seem odd, but it is important to incentivize players for investing so many resources and cards to boost their allies. Still, even the younger Bard’s ability is not a reliable form of “attachment bounce” as long as you are using allies which are designed to stay in play. It remains to be seen if some hybrid Dale/Rohan deck is feasible, where attachments are added to Rohan allies before they leave play. Since the discardable Rohan allies have feeble stat lines and possess little to no attachment synergy, I am skeptical of this approach.

The card which immediately piqued my interest, and well and truly makes “attachment bounce” a viable strategy, is Bartering. As a bear who greatly enjoys creative deck-building challenges, this card is like finding a bonus honey cake that you forgot in the pantry. While there are many ways to take advantage of Bartering, this deck goes with the tried and true approach of using a record attachment.

This deck starts the game with three Lore Hobbit heroes – each with a well-defined role. Folco Boffin lowers our starting threat into Secrecy range, giving us a round of two to play Resourceful at a discount. Pippin helps us to avoid enemy engagement in the early game, while we get our Ent army mustered. Once we have viable combat allies, he provides supplemental card draw via Hobbit-style optional engagement. Good old Mr. Bilbo Baggins provides consistent card draw, even in the two player games for which this deck is best-suited.

Anyone who has played a Secrecy deck can attest to just how critical it is to play your secrecy cards in the first two rounds. The abundance of card draw obviously helps to make this deck more consistent. At 4 cost, Resourceful is an expensive card to draw when you are sitting at 21 threat thanks to an ill-timed treachery. This is where Bartering and Scroll of Isildur get to shine. The Scroll only costs 1 resource to play from hand, as long as Folco hasn’t wandered off into the woods. Between the discount to Scroll of Isildur and the bonus card from Mithrandir’s Advice, this might be one of the few Folco decks which doesn’t necessarily want to immediately feed Folco to the abyss. 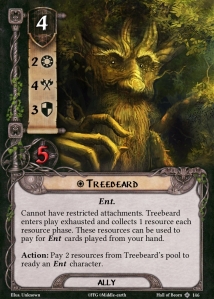 By returning our discounted Scroll of Isildur to our hand, Bartering then allows us to play a Resourceful for free – even when we are no longer in Secrecy. To be fair, the Scroll is not solely included for Bartering trickery. In a deck chalk-full of powerful Lore events, the Scroll can be quite useful in its own right. The goal is to get two copies of Resourceful (or one copy and a Necklace of Girion) as quickly as possible. Ent allies are relatively inexpensive, and Treebeard ally helps us pay for them – especially useful for playing Tactics Ent allies before we’ve found our Song of Battle. Still, this deck relies heavily on Ents for both questing and combat, so it’s essential to avail ourselves of the strategic pillars of resource acceleration and card draw, to muster our ally army.

This deck has more to offer than just haggling with the Sackville Baggins over spoons. Like most Ent decks, it has an inherent tempo to its power curve. Put another way, there will be rounds where you are vulnerable because your Ents come into play exhausted. This is where encounter control cards like The Hidden Way (proxied with The Evening Star in the RingsDB version of this deck) and Gildor’s Counsel are invaluable. As previously mentioned, this deck is designed for multiplayer games. Hobbits are squishy heroes under the best of circumstances, and while Ents are more than capable of protecting their halfling friends, this deck can start slowly. The ability to reduce the number of encounter cards revealed is critically important for a deck which is trying to shepard a lumbering army of tree-herders.

This strategy represents just one way to take advantage of Bartering. I have no doubt that intrepid deck builders in the community will identify and exploit many other fun and powerful combinations with this card. It’s a testament to the quality of the player cards in The Wilds of Rhovanion that when you look past the obviously powerful cards you continue to find hidden gems. It’s fair to say that this set is deep with interesting and effective cards. From the looks of the The Withered Heath, this trend will only continue with the Ered Mithrin cycle. Check out the RingsDB version of this deck (remember that The Evening Star is a proxy for The Hidden Way)

Cards up to The Withered Heath

Decklist built and published on RingsDB.