The sheer volume of media based upon, or at least loosely inspired by, Tolkien’s writing is impressive. It speaks to the depth and detail of Tolkien’s world that there can be so many different, not to mention excellent, interpretations of Middle-earth. For some of us grey-beards, this fine LCG is not our first foray into a Tolkien-based card game. Middle Earth Collectible Card Game, by Iron Crown Enterprises holds a dear place in my heart, as I know it does for some others in the community.

At this point I believe it is fair to say that this game has far surpassed all other card games set in Middle-earth. Between deluxe cycles, Saga campaigns, Fellowship and Gen Con quests, there truly is something for everyone. The attention to detail continues to be what impresses me the most. As a lifelong fan of Tolkien, it is the little touches that remind me that the designers of this game, unlike many franchise-based games, have a deep affection for the source material.

Even so, there are some elements from Middle-earth CCG that I miss. One of the aspects of that game that I really enjoyed was the way that locations had an impact, both geographically and in terms of the kinds of allies you could recruit. This allowed for a wide variety of deck strategies, and helped keep your enemy guessing about where you might travel next. I’ve taken inspiration from Middle-earth CCG’s concept of strategic locations in Middle-earth with this wrinkle to my latest draft format.

The idea is simple: after players have finished drafting, they will have the option of selecting a haven from which there party of heroes begins their quest. This takes places immediately after players select their General and add his signature squad to their draft cards, so the decision adds to the strategy of how you will finish building your deck. 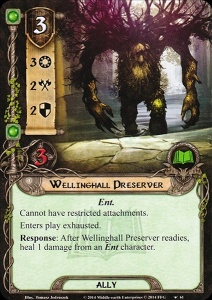 Havens are thematically and strategically tied to the group of beings which inhabit them. For example, Wellinghall is filled with Ents and Ent-related cards. On the other hand, Meduseld is where you will find the Rohirrim and their majestic steeds. Imladris is where you can find the household of Elrond have-Elven. Likewise the Grey Havens of Lindon house the shipwrights who take the Noldor to the undying lands. Any take of refuge from the horrors of the world would of course be incomplete without mentioning The Shire, bustling with the indomitable Hobbits.

Starting with whichever player last picked their General, players will choose a Haven from the list below and add those cards (in the specified quantity) to their draft cards and the signature cards for their General. All havens include six cards, just like signature squads, and players are encouraged to choose a haven which matches well with their choice of hero. For example, selecting Celeborn as your General and then choosing to start in the Haven of The Naith makes all kinds of sense.

Unless otherwise specified (e.g. x2 or x3), haven cards come with only a single copy of each card. Just as with signature squads, havens do not allow you to break deck-building rules of 3 per card by title, so players should keep that in mind when they are selecting. Each of these cards is optional – you can play with as many or as few haven cards (from your selected haven) as you want. With a wise choice, many haven cards will be beneficial to your overall strategy. As a final option, players can choose not to begin at a haven at all and take a more Ranger-like approach. Instead of receiving haven cards, these itinerant players gain one copy of Core Set Gandalf and 2 songs from this list: Song of Kings, Song of Battle, Song of Travel and Song of Wisdom.

For those interested in variant format and draft, be on the lookout for the final article in the series of Bear Draft v3, in which I detail the new draft pool. In the mean time, happy travels through Middle-earth – may you found yourself in many happy havens to rest your weary feet!

Erebor (and The Iron Hills)

As a reward for those who’ve made it this far, here is the latest animal helper to join us at the Hall of Beorn: his name is Kitty.