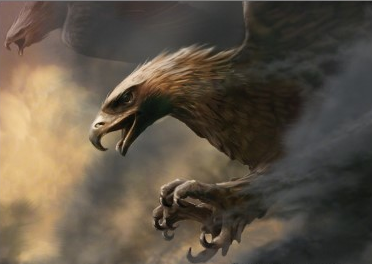 In the latest episode of The Grey Company Podcast, designer Matt Newman mentioned that it would probably be possible to make an Eagle and Ent deck, even though these archetypes are disparate and supplemental in nature. This inspired Matthew D to make an Eagle Ent deck and he joined Matt Hidalgo (honorary fifth member of the Podcast) on a recent Twitch stream of The Three Trials. I have yet to see Matthew’s deck list, but their game lead got me thinking about such a deck, and how I would go about blending these two traits. What follows is my first attempt at an Eagle and Ent deck.

The question was posed on the forums in a recent thread, “are Ents too strong?“. There have been some really solid arguments on all sides, but what is most remarkable to me is just how quickly the Ents have emerged as a power in the meta-game. We didn’t see our first Ent character until half way through the Ring-maker cycle. It wasn’t until the last AP that we got Treebeard, and the archetype as-such actually came into existence.

Just like the Eagles after the Shadows of Mirkwood cycle, the Ents are by their nature a supplemental archetype. Regardless of where you would place them on the power continuum, there simply are not yet enough Ent cards to make an entire deck dedicated to this trait. This is a good thing, both from a thematic standpoint and for reasons of game balance. While they were undeniably powerful in the books, Ents were rare. It would feel more than a bit odd, thematically if you could field an army of 25 Ent allies and related attachments and events, to the exclusive of all other traits. As many on the forums have pointed out, this would also be far too powerful. 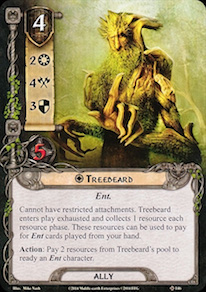 A real testament to the current designers of the game is the way Caleb and Matt have balanced thematic and strategic concerns in their design decisions. Ents are a perfect example of this as they are incredibly strong, but with a meaningful and appropriate drawback. Coming into play exhausted is a significant hindrance to a deck’s action advantage, but to offset this Ents are noticeably under-costed for their stats. This means that a deck featuring Ents will tend to be vulnerable in the early game, but should excel as the game progresses, and their patient Ents decide to finally take action.

This early-game vulnerability has a perfect answer in the form of Eagles, however, which is why this deck concept is less crazy than it might at first seem. Having inexpensive allies which help a deck to survive the early game is exactly what an Ent deck needs. If we manage to get an Eagles of the Misty Moutains into play early (using ally mustering like Elf-stone or A Very Good Tale), these smaller Eagles won’t have to die in vain. Regardless, this deck does not rely on Eagles as heavily as some of the other decks I’ve designed in the past. Ents provide a measure of versatility to our strategy. 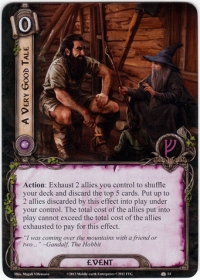 At first glance, a card like A Very Good Tale might seem like an odd choice, given that Ents already have a deficit of action advantage. The key to maximizing the benefit of this card is deciding which allies to exhaust. For example, once we get a 4 cost ally into play, we can exhaust it and any other ally we have to help pay for A Very Good Tale. Having at least 5 points worth of allies exhausted for this effect ensures that we will be able to field at least one, often two powerful allies.

Along with the two non-unique Ent allies, there are several powerful allies with a lower cost, including the Westfold Outrider, Warden of Healing and Gléowine. Even with only 5 points worth of allies to muster, we have options. We can bring two low-cost allies into play and have a tremendous numerical superiority on the following round. Alternatively, we can muster one larger ally like Faramir, Treebeard, of Gandalf, and use their abilities to help swing the tide of battle. In this case we are taking advantage of the Ent’s low cost to potentially bring multiple into play, without having to exhaust multiple powerful allies to pay for A Very Good Tale. Over the long run, the cost efficiency of these allies allows us to outpace the encounter deck.

By fielding bigger and better allies, more quickly than the encounter deck can summon enemies, the hope is to never give the scenario the chance to obtain the upper hand. As any player of the game knows, there are often rounds where the situation quickly turns from “under control” to “uh no, we’re all going to die!” in a matter of a single quest phase. The goal of this deck is to avoid that situation by providing us with more options than the encounter deck could possibly handle.

With that in mind, the last major piece of our strategy is card drawing effects. The aforementioned Gléowine is a nice repeatable source of extra cards, while Daeron’s Runes and The Eagles are Coming! will help us find the allies which are so important to early-game survival (or late-game dominance). But the engine really gets running hot once we have King Under the Mountain attached to Bifur.

This deck features quite a few duplicate copies of unique cards. These cards are essential to our overall strategy and the deck is at risk of stalling when one or more of them are not on the table. To some extent, this limitation is present in all decks, but it is particularly evident in this one. Because we are merging too different archetypes, with traits that lack any explicit synergy, we are that much more dependent on the key pieces. For Ents, this is Treebeard. For Eagles this could be an Eagles of the Misty Mountains, or even just one of the smaller allies to help us deal with an immediate threat. A general rule that hold true for most strategies in this game and is certainly applicable here: when in doubt, add card draw.

As I mentioned at the top of the article, this is a first attempt at this hybrid archetype. Initially I was skeptical that there was much potential here. However, the sheer power of the Ents, combined with the efficient synergies that Eagle cards share with each other, has me convinced that there is some promise to this idea. I have no doubt that we will see more Ent cards in the upcoming Angmar Awakened cycle, probably even some attachments or events. We might just see this amusing amalgamation of cards coalesce into a new dominant archetype, but it is entertaining in any case.

6 Responses to Deck: Eagles and Ents