Deck: The Window on the West

‘See here, Captain!’ He planted himself squarely in front of Faramir, his hands on his hips, and a look on his face as if he was addressing a young hobbit who had offered him what he called ‘sauce’ when questioned about visits to the orchard. There was some murmuring, but also some grins on the faces of the men looking on: the sight of their Captain sitting on the ground and eye to eye with a young hobbit, legs well apart, bristling with wrath was one beyond their experience.

Window on the West is a turning point in the story of The Lord of the Rings. Frodo and Sam are about to leave behind the lands of men and venture at last into Mordor; their fate awaiting at Mount Doom. Faramir, Captain of the rangers of Ithilien, learns the truth about his brother and Isildur’s Bane. The decisions made at this point would have ultimately contribute to the Ring’s destruction.

This deck represents the last time that the Ring is within the grasp of the Men, and the critical choice that faces Faramir of Gondor. Faramir is leading the rangers of Ithilien in a desperate attempt to hold-off the Haradrim armies that are mustering on their borders. This deck is a different take on Secrecy which makes excellent use of one the less-heralded cards from The Dunland Trap: Ithilien Lookout.

There are many things to like about the Ithilien Lookout. First of, a Lore ally with 2 attack and 2 hit points is worth three resources for the stats alone. Secondly, Gondor and Ranger are both valuable traits. The first can take advantage of Visionary Leadership, if we need this ally for questing. The later trait is useful if we need to attach Ranger Bow to our Lookout, and use it to attack the staging area.

In a deck which lays traps in the staging area, the response of this ally should not be overlooked either. If we see an enemy that would be dangerous to leave in the staging area (for example: one with the archery keyword) we can use the Lookout’s ability to discard that foe. On the other hand, if a particular enemy would be harmless once trapped, we can leave them on the top of the encounter deck, secure in the knowledge of an uneventful quest phase. Henamarth Riversong can even be used ahead of time, so that we know when is the best time for our Lookout to enter the scene. 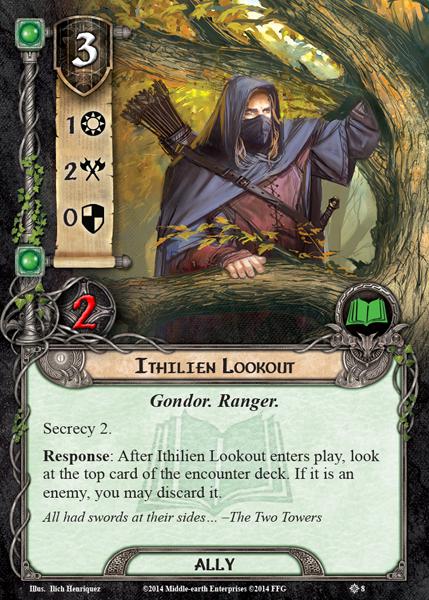 All of the above would make the Ithilien Lookout a solid card in its own right. However the real advantage of this ally is when we can draw it within the first few rounds, and play it for only 1 resource. This is the kind of support that Secrecy needs: cards that are good when played for full cost, but excellent when played at a reduced cost. This deck is tailored to make the best use of Gondorian Rangers, and the Ithilien Lookout serves as the low-cost soldier which makes this strategy work.

Two other Secrecy staples, Resourceful and Timely Aid make an appearance here. Resourceful is particularly helpful in ensuring that Faramir has extra resources. These resources are not only needed to pay for all of the Lore allies and attachments in this deck, but they also help to power Visionary Leadership.

Timely Aid is a great way to muster the more expensive allies like Ithilien Archer, Anborn or even Gandalf. As for Anborn, Faramir’s lieutenant has a bevy of attachments at his disposal. With help from the Lookout and Henamarth Riversong it becomes possible to ensure that any enemy entering the staging area is always walking into a trap.

Gandalf is only one way for this deck to lower its threat, which might seem like a major limitation for a Secrecy strategy. A better way to think of Secrecy in this deck is as a supplement to the overall strategy. A low starting threat, combined with solid willpower allows us to leave high-engagement enemies in the staging area. Eventually, we can use traps to neutralize these enemies, even  sending engaged enemies into traps with the help of Ithilien Archers.

Enemies in the staging can be dealt with in several different ways. If they are trapped, they can often be ignored. High engagement-cost enemies can be optionally engaged, with Sam giving us action advantage. With other enemies in the staging area, Faramir’s attack power should be boosted to the point where he and his men can make quick work of the enemy. With excellent card draw, we also stand a good change of having Ranger Bow equipped to one or more of our rangers. In this case, we can sit back with our low threat and safely snipe the enemies from a distance. No need to fight an army of Haradrim up close, when we can drown them in a hail of arrows.

Secrecy is only really needed in the first few rounds, to help offset the absence of a third hero. Timely Aid can give us an expensive ally, helping to overcome the action disadvantage from the missing hero. Likewise, Resourceful pairs with Steward of Gondor to give our two heroes plenty of resources. Errand-rider can also help to ensure that unused resources are moved to where they are more effective. Daeron’s Runes and Master of the Forge both help to get critical cards into our hand as early as possible.

Ultimately, this deck can reach a point where it has full control of the staging area, and more than enough willpower to deal with any locations that come up. The initial boost from Secrecy just makes this early game setup a bit more consistent. If you happen to draw Gandalf later, after your threat is to high for Secrecy, you can always make use of his other abilities. It is never a bad thing to have a wizard by your side. 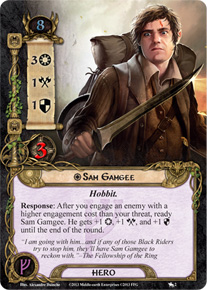 14 Responses to Deck: The Window on the West